There aren’t many strict rules when it comes to photography. And rule of thirds is one of those few rules. Basically a composition guideline, it’s a good rule to know and can be helpful to follow, but you shouldn’t worry about breaking it when you’re experimenting with your photographs and trying to be creative.

It’s believed that the human eye is naturally drawn to specific parts of an image and that’s why it’s often used in photography as well as in works of art. To follow the rule in photography, you have to imagine your photo frame being separated into nine equal squares much like a tic-tac-toe board. The lines that separate the photo will intersect in four locations and these are considered by experts to be the image’s strongest focal points with the actual lines being secondary focal points. 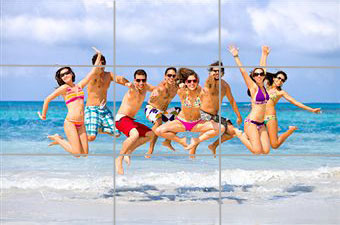 If you can visualize the grid of nine squares when taking your photos you’ll be able to use the rule. If the camera has autofocus points you can use those to help locate where the strongest focal points are on the image. It’s also possible to attach a grid to a camera’s LCD screen if need be. This can be done by using a clear material. Once you realize where the strong focal points are you can place your subject at one of them.

If there is only one object or person in your photo a strong location is the left hand line of the grid since the eye naturally moves from left to right when reading. However, if the culture you live in reads from right to left then you can place the subject on the right side of the image. If the image has more than one subject in it, you’ll find it’s natural that the foreground will be more dominant and noticeable than the background.

However, if you use the rule of thirds you can really emphasize this or try to reduce the dominance of the foreground. When there is more than one subject, the bottom right focal point is considered to be the strongest and the upper left the weakest. Therefore if a background subject is placed on the right side and a foreground subject is placed on the left it may confuse the viewer’s eye as the two subjects will be fighting for dominance in the image.

Many photographers like to place their subjects on the opposite line of the direction they’re looking towards. An example of this would be to take a portrait photo where the person is facing the left and their position in the photo will be on the right. This way it appears they’re looking into the image instead of off the photo.

When taking portraits, most people’s bodies are centered in them and their eyes are located on the top line that crosses the grid. If there are several people in the photo their faces are typically placed along one of the grid lines, especially in photographs such as class pictures.

However, there are exceptions to every rule. Just do what you feel is right when taking a photograph and take the shots to please yourself. You don’t really have to worry about other people’s preferences unless of course you’re a professional photographer and they’re paying your bills.